Update! I initially wrote this post a few years ago. It looks like 7-11 has made some changes to their labeling and most Slurpee’s are now listed as Gluten Free. Some still have no specific label. Head on over to http://www.slurpee.com and check the labels yourself.

We are a gluten free family, at least we try real hard. I’ve discussed my experience with Celiac disease in the past. Overall I do pretty good, but some days I have to admit that Celiac Disease sucks!

Here’s a classic example. My wife and daughter recently spent the weekend away, so my son and I got to hang out and have fun! One of those fun things is stopping at 7-11 for Slurpees after baseball practice. Slurpees are definitely not a health food and have no nutritional value, but they are a fun occasional treat. This is where having celiac disease sucks. Some Slurpee flavors are not entirely gluten free! Take a look at this photo of the nutritional information. 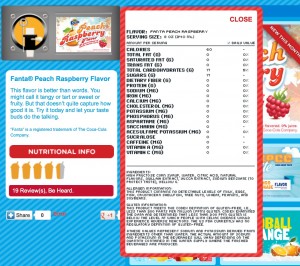 If you do a few searches you’ll find that it is generally assumed that Slurpees from 7-11 are gluten free, but lets look at the fine print on the nutritional information for the Peach Raspberry Slurpee.

In one statement it mentions that “This product contains no detectable levels of milk, eggs, fish, crustacean shellfish, tree nuts, wheat, peanuts, and soybeans.”

The next statement says: “Gluten Information: This product meets the CODEX definition of Gluten-Free, I.E. less that 200 parts per million (ppm) gluten. Codex Examined the data and determined that less than 200 ppm gluten is below the level at which people with celiac disease would experience adverse reactions. The US FDA currently has no regulatory definition of gluten-free.”

When I read this last statement I realized that many Slurpees are not gluten-free. The Gluten-Free Dietician has a good write up regarding the Codex definition of gluten-free foods. Basically the 200ppm gluten standard comes from a report in 1998! The Codex has revised their guidance down to 100ppm  in 2007 and it is still under review. The FDA in August 2013, just created a standard for Gluten-free labeling of 20ppm. I guess the good news if all of this is that I discovered why I felt lousy over the weekend.

So here’s the Slurpee dilemma, there are some Slurpee flavors that don’t contain these statements in their labeling, but each store uses the same dispensers for both, so the potential for cross contamination is high, even for the flavors that are labeled gluten-free.

Which leads to why some days it sucks to have Celiac Disease. I’m hopeful that the FDA labeling rules announced in August 2013 will help weed out the products that use gluten-free as a marketing tool. I don’t trust labels. I don’t trust restaurants. It’s still hard to meet friends for dinner. It’s still hard to goto a friends house when food is involved. And now cross off having a Slurpee. For some of us 20ppm is enough gluten to rip our insides to pieces. Those few ppm of gluten don’t cause an allergic reaction so most of us don’t have to race the ER for treatment. I don’t know what my threshold of gluten causes problems, I don’t get noticeably sick, but I’ll get a low grade stomach ache, I’m also starting to believe that my episodes of bradycardia are related to gluten exposure(definitely need to do some more research on this as I haven’t found much more than some theories). And of course I can still see the photo of my smooth, damaged villi on my biopsy report from 4 years ago and think what have I done to those poor villi!

So back to fierce label reading and back to gut healing….

Who’s had a reaction to a Slurpee? Have any other foods supposedly labeled gluten-free have caused a reaction?

Comments on this entry are closed.